From Across the Pond: A Happy Sad BAFTA Mask Winks.

The BAFTA Awards was an elegant event that motorized ultimate momentum for The Theory of Everything.  With only one Guild vote left (Writers, Feb 14th – Oscar voting ends Feb 17th), this Brit peer Award can propel, upset and define the Oscar race. 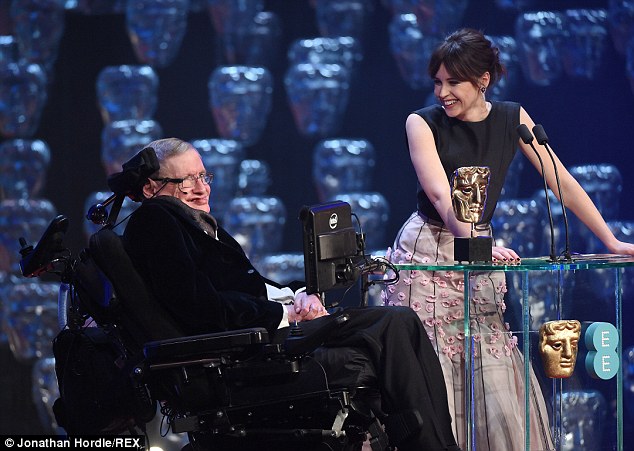 Stephen Fry was a great host, but the big highlight was the presence of Stephen Hawking, who presented the VFX category to Interstellar, definitely the most science based of the nominees.  And his presence betrayed the loving bias from this group towards the TOE, which took home three awards, including Best British Film.  Eddie Redmayne’s takes this win for Best Actor adding to his SAG and Golden Globes wins.

GB Hotel  took five out of its trove of eleven nominations: Costume, Make-up, Music, Production Design and Original Screenplay (with a great acceptance speech by Ralph Fiennes on behalf of Wes Anderson).  Big winner: Whiplash, with three major awards; big snub: The Imitation Game, with zero.  Boyhood took top honors for the night, Best Film and Director, edging over Birdman that got one for its outstanding cinematography, as expected.  It could be said that Birdman is not cruising by, despite its major guild wins. Then again — it so American.  Julianne Moore picked up the seventh major win in her category.

Interesting were Fry’s jabs at Russia and Putin, on top of Russia’s Leviathan’s loss to Poland’s Ida in the Foreign Film category.

All images copyright their respective owners.